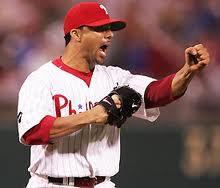 Last time JC Romero was seen in the Phillies uniform he was a hero. He was one of the most cherished Philly among fans of the City of Brotherly Love.

The 33-year-old left-hander reliever was the winning pitcher in Game 3 and clinching Game 5 of the 2008 World Series.

That was then (October).

Turning forward the calendar, last weekend Romero was against the Marlins at Dolphin Stadium roaming around with his teammates for the first time this season. Just in plain cloth. No uniform and not allowed to be in the dugout and its clubhouse.

It was no vacation. Romero is far less than halfway of a 50 games suspension by Major League Baseball after testing positive for a banned over-the-counter substance. And Romero still is not happy about it.

“It could be worse,” Romero said. “I was very mad until I saw (Angels pitcher) Nick Adenhart passing away. That changed my perspective on everything. Money comes and goes. Baseball is a game. People make mistakes. In this case, making decisions and ruling certain things. But when you lose a life, it changes everything. Whatever they decided to do to suspend me, that’s nothing compared to losing your life.”

After four months, no matter the rhetoric of Adenhart, Romero still firm that the decision made was completely unfair because he ingested a supplement without knowing it contained a banned substance.

Back in January, Romero suspension was on the grounds of “negligence”. He was not accused or found guilty of knowingly using a banned performance-enhancing substance.

At the time Romero’s argument was that he bought the nutritional supplement from a GNC store in Cherry Hill, New Jersey. He thought buying an over- the- counter product from a national chain was acceptable and by no means was illegal. By the same token no reason to be banned by Major League Baseball.

“I still cannot see where I did something wrong,” Romero said back in January. “There is nothing that should take away from the rings of my teammates. I did not cheat. I tried to follow the rules.”

At present, Romero is playing extended spring camp in Clearwater, Florida.  He only said is eligible to begin a rehab assignment 16 days before the end of his suspension and pitch in minor league games. He said he will be eligible to be activated the first week of June.

As far of his case, he completely declined to go into further details. He only said he would later in the future decide what exact court of action he will take underway.

Romero stated back at the World Baseball Classic in Miami he has retained a lawyer who will pursue some sort of legal action. Romero has been report it have lose approximately $1.25 million of his salary.

Romero expressed also at the time he was not pleased with the support from the Players Association.

As for the record, all Phillies personnel, including coaches and players,  in their recent visit to South Florida were mum about Romero’s case. Back in February, last Philly word regarding Romero was his permission to play in the World Baseball Classic. By the way, another matter Romero did not want to talk about it.

Romero was the losing pitcher in the USA back-from-behind victory against Puerto Rico in the Classic’ Round 2 elimination game to advance to the finals round.

Romero insists all the substance issue decision was unfair however now his mind and heart is looking toward his 11th season in the Majors.

“There are things I have to deal with, and I’ll move forward,” Romero said.