When you arrive to the Boston Red Sox training facility, The City of Palms Park, in one of the practice fields there is a sign Felix Maldonado Field.

Probably young generations have never heard of him. He was never a major leaguer. He never wear a big league uniform. Period.

However, Maldonado, 71 and a very proud puertorrican, his dream came true when manager Jose “Cheito” Oquendo invited him as a one day coach for Team Puerto Rico.

“It s a very special day”, Maldonado said. “I’m the happiest person in the world. My dream came true watching on the field all the Puerto Rican all-stars together”.

Maldonado is in his 46th season as a Red Sox employee and have seen many great Red Sox squads. Most recently the 2004 and 2007 World Series championship teams.

“This is different. watching players like Ivan Rodriguez, Bernie Williams and Carlos Delgado it will be unforgettable”, Maldonado said.

Maldonado memory has seen them all. He still remember his winter league heydays and playing against such greats as hall of famers Roberto Clemente, Orlando Cepeda and Tany Perez. Maldonado also remembers when he played in the Caribbean Series in 1959, 1960, 1970 and 1971.

After his player days he became a Red Sox scout from 1971 to 1989. He is now a player development consultant for the organization and works with the Class-A Fort Myers Miracle affiliate.

Last time JC Romero was seen in the Phillies uniform he was a hero. He was one of the most cherished Philly among fans of the City of Brotherly Love.

The 33-year-old left-hander reliever was the winning pitcher in Game 3 and clinching Game 5 of the 2008 World Series.

That was then (October).

Turning forward the calendar, last weekend Romero was against the Marlins at Dolphin Stadium roaming around with his teammates for the first time this season. Just in plain cloth. No uniform and not allowed to be in the dugout and its clubhouse.

It was no vacation. Romero is far less than halfway of a 50 games suspension by Major League Baseball after testing positive for a banned over-the-counter substance. And Romero still is not happy about it.

“It could be worse,” Romero said. “I was very mad until I saw (Angels pitcher) Nick Adenhart passing away. That changed my perspective on everything. Money comes and goes. Baseball is a game. People make mistakes. In this case, making decisions and ruling certain things. But when you lose a life, it changes everything. Whatever they decided to do to suspend me, that’s nothing compared to losing your life.”

After four months, no matter the rhetoric of Adenhart, Romero still firm that the decision made was completely unfair because he ingested a supplement without knowing it contained a banned substance.

Back in January, Romero suspension was on the grounds of “negligence”. He was not accused or found guilty of knowingly using a banned performance-enhancing substance.

At the time Romero’s argument was that he bought the nutritional supplement from a GNC store in Cherry Hill, New Jersey. He thought buying an over- the- counter product from a national chain was acceptable and by no means was illegal. By the same token no reason to be banned by Major League Baseball.

“I still cannot see where I did something wrong,” Romero said back in January. “There is nothing that should take away from the rings of my teammates. I did not cheat. I tried to follow the rules.”

At present, Romero is playing extended spring camp in Clearwater, Florida.  He only said is eligible to begin a rehab assignment 16 days before the end of his suspension and pitch in minor league games. He said he will be eligible to be activated the first week of June.

As far of his case, he completely declined to go into further details. He only said he would later in the future decide what exact court of action he will take underway.

Romero stated back at the World Baseball Classic in Miami he has retained a lawyer who will pursue some sort of legal action. Romero has been report it have lose approximately $1.25 million of his salary.

Romero expressed also at the time he was not pleased with the support from the Players Association.

As for the record, all Phillies personnel, including coaches and players,  in their recent visit to South Florida were mum about Romero’s case. Back in February, last Philly word regarding Romero was his permission to play in the World Baseball Classic. By the way, another matter Romero did not want to talk about it.

Romero was the losing pitcher in the USA back-from-behind victory against Puerto Rico in the Classic’ Round 2 elimination game to advance to the finals round.

Romero insists all the substance issue decision was unfair however now his mind and heart is looking toward his 11th season in the Majors.

“There are things I have to deal with, and I’ll move forward,” Romero said. 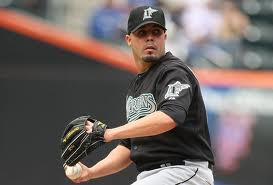 It’s just the beginning of the season. The grass still green and fresh.  Every baseball fan is pump up and all players have a slight illusion of post-season play.

The Florida Marlins have commence the young season with its best start since its 1997 World Championship team and on its bench only smiles are seen.  Sure, it’s only the first week. This is definitely not the ample talented that Jim Leyland managed 12 summers ago but why not to enjoy it meanwhile it lasts the good streak.

Among the grinning faces in Fredi Gonzalez squad are the two boricuas in the fish tank Kiko Calero and Andy Gonzalez.

“I’m very happy to be here. I knew I deserve the opportunity and I’m going to do the best of it”, Calero said at Miami’s Dolphin Stadium.

Calero, signed as a Minor League free agent in late January, it’s making his words good and at this moment has now pitched 2 2/3 shutout frames to start the season.

“I work very hard to be here. I made some sacrifices and I want personally to demostrate that I’m back and healthy”, Calero said.

And sure he made a huge sacrifice back in March. The 34 year-old right-handed bolted to join Team Puerto Rico for the World Baseball Classic and instead stayed behind at the Marlins spring training camp in Jupiter in order to win a spot as a relief pitcher as a non-roster invitee.

Not only the Santurce native was just an invitee. Calero have to demostrate he could come back from a rotator cuff injury that kept him out from pitching last season.

Calero problems started in 2007 when he appeared in 46 games as shoulder problems arise and caused him to miss the final month of that season. In 2008 after only 5 games pitched he was released by the Oakland A’s. After being designated for assignment and released, Calero signed with the Texas Rangers on July 4, 2008.  The Rangers signed Calero to a minor league contract and assigned him to Triple-A Oklahoma, where he spent the rest of the season.

As of Andy Gonzalez, he’s smiling too. Even though, there it is the possibility he will be victim to be send to the minors when the Marlins called up super utilty Alfredo Amezaga from the disabled list his happy.

“This was my goal. To start the season in the major league roster and show my abilities”. Gonzalez said. “Even if I’m sent down, I know I will be back soon”

Manager Fredi Gonzalez pointed out that Gonzalez, 27, have a great chance to be with the big club for long and is a player that can help the team coming out of the bench.The cuban-born skipper praised Gonzalez as he can play both the infield and outfield very soundly.

As of Calero, Manager Gonzalez praised him as a veteran that will see a lot of innings this year and can be a good candidate for Comeback of the Year.

Only few days are left to finally listen the cry of Playball ! in most major league parks. No more spring training exhibition games.

Starting April 5th it is the real thing. Under the lights, the Philadelphia Phillies will open officially the 2009 season on national TV against the Atlanta Braves. For many, many years truthfully not many care about the Brotherly Love city Phils. This season Charlie Manuel’s troop is a must watch.

The Phillies will try to be the first defending champs this decade to win back to back titles. Since 00′, Major League Baseball champions includes the Yankees, Diamondbacks, Angels, Marlins, White Sox, Cardinals and twice the Red Sox. In paper, it looks the Phillies have all the tools to return to the World Series and fulfill the feast last accomplished by the 1998-2000 Bronx Bombers.

In Puerto Rico, I wonder how many really care about the Phillies and for the whole purpose the baseball upcoming season. Back at the turn of the century the list of boricuas in the Majors use to be around 50 every summer. Most were big names to their franchises and well-known for every baseball fan. Every All-Star Game was fully loaded with puertorriqueños, same as post-season time.

For the last, around two-three years, it have been follow closely the dwindling decrease of islanders in the big show.

Probable starters in a regular rotation this upcoming season are Javier Vazquez (Braves) and Joel Piñeiro (Cardinals). Let’s not forget new puertorrican Ian Snell (Pirates) who was nationalized with his two starts in the last World Baseball Classic. By the way, not to make the matters worse, but not even 20 more names are present in spring camps competing for a bench spot, utility role or pitching job to make in the season’s opener 25-man rosters.

The glory days are gone? Good question. No doubt, we can not take anything from the current crop. Every year there is at least one islander that excels and make all Puerto Rico proud.

Last season the man was Geovany Soto. The young catcher was the National League Rookie of the Year and selected by all major national media outlets for the same honor. Also, let not forget the excellent season of National league Gold Glovers Carlos Beltran and Yadier Molina.

Hooray for the honor. However, circa 1998 it would have taken at least two more paragraphs to write the accolades of our Puerto Rican stars. That it would have included such names as Juan Gonzalez, Ruben Sierra, Carlos Baerga, Edgar Martinez, Roberto and Sandy Alomar. It was the hey-days of Pudge Rodriguez with Texas and Carlos Delgado with Toronto. Let’s not forget that time around Carlos Beltran was just coming up in 1999 as American League Rookie of the Year. Mike Lowell was just a rookie making a name for himself with the Florida Marlins.

There is a lot of talk about the different reasons with the continuing decrease of major league caliber local talent. And for God sake let’s not start to compare with the continuous rising baseball talent from the Dominican Republic and Venezuela.

Let be honest, Puerto Rico still is baseball country. It was seen the passion and colors in the last World Baseball Classic. True a bad ninth inning against the USA derailed a final-four appearance dream in the world tourney. However no dream should be broken in the future.

The future is now that players have to arise again. Yes, we are very proud of the legacy of Roberto Clemente and Orlando Cepeda and hopefully future hall of famers Robbie Alomar and Edgar Martinez. However, again, we need that boom of baseball players to build up again and fill up the majors. Meanwhile, do care and enjoy the upcoming season and root for your favorite team and favorite puertorrican player.